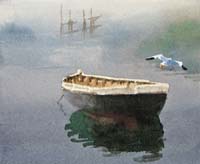 Born in Liverpool in 1865, a landscape and marine painter who studied in London and Paris. In 1882 he was articled to Henry Alty, Borough Engineer of Plymouth and his work brought him to the attention of the Plymouth artist William Cook. In 1888 he was elected to Institute of Civil Engineers, after which he turned to architecture, practising in South Wales. He made frequent sketching tours of Devon and Cornwall and in 1897 gave up his carreer and settled in Plymouth. In 1899 he studied with Stanhope Forbes. He held one-man exhibitons at the Walker Gallery in 1910 and 1912 and was much patronised by the Royal Family. A miniature painting by him is in the Queen's Doll's House. He also lived in London and Norfolk and he signed usually with just his surname.

He held exhibitions in the Walker Gallery, Bond Street in 1910 and 1912 and from the latter, one of his watercolours was purchased by King George and another by Queen Alexandra. Later, he exhibited at the Royal Academy, Royal institute, R.B.A., Royal Canadian Academy and the Royal Cambrian Academy, Manchester. After an invitation by Princess Marie Louise he painted a picture of the Queen’s Doll House. Many of his watercolours were sold in America and Canada. He occasionally worked in oils but his preferred medium was watercolour. Hannaford lived for periods in Fowey Cornwall and London before moving to Norfolk. For a time he lived at Stalham and South Walsham where he was churchwarden before settling in Thorpe. Provenance: C.A. Hannaford; Frank Albert Allchin (his father-in-law); Frank McDonald (Frank Albert Allchin's son); Frank Raymond Allchin (Frank McDonald's son); Bridget Allchin (Frank Raymond Allchin's wife).